The state of freeride is pushed to the next level as riders on the FWT, FWQ, and FJT cap off a successful season where a community united to bring the exploding popularity of the sport to new heights.

It was an emotional finish in Verbier as the season closing event perfectly symbolized a season full of glorious victories, upsetting defeats, and the infinite number of memories that define a season on the Swatch Freeride World Tour.

Starting off in the Pyrenees mountains of Vallnord - Arcalìs, Andorra, it was a season that defied conventions – a season where champions fell and where new heroes were born. As perfect winter conditions draped the glorious towering peaks of Chamonix-Mont-Blanc, riders were challenged in the tempestuous and moody weather of other venues. The psychological battle of qualifying for the heavenly spines of Alaska reinforced the pressure heading into the cut-off stop at Fieberbrunn, Austria. The few and the proud were rewarded as they made the transatlantic journey to compete on Alaskan peaks that seemingly existed only in dreams. Those who were able to conclude their season on the intimidating Bec des Rosses in Verbier secured their names in the annals of freeride history as they pushed the limit of what is possible for their respective disciplines.

Each year the FWQ is redefined as riders who embody the purest passion of the sport develop a league that drives the forward progress of these remarkable athletes. The essence of freeride was alive and kicking as riders battled through early low snow conditions to demonstrate their skills on the world stage as they yearned for a chance to compete alongside champions. The 3* events often held precedence over 4* events for riders vying for a spot on the FWT due to cancellations, yet all of the aspiring riders exhibited the most impressive level of competition to date. The relentlessly exploding worldwide popularity of freeride was more evident than ever as hundreds of riders from across the planet participated in the global FWQ league. When the dust cleared, twelve riders combined from Region 1 (Europe Oceania) and Region 2 (Americas) will have a chance to compete on the main stage on next year’s elite tour with the greatest names in the sport. 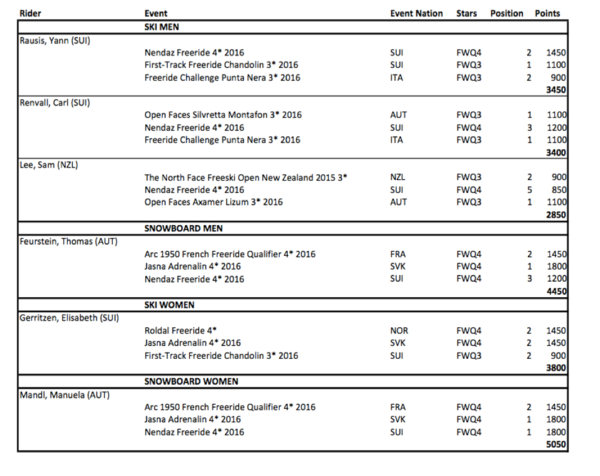 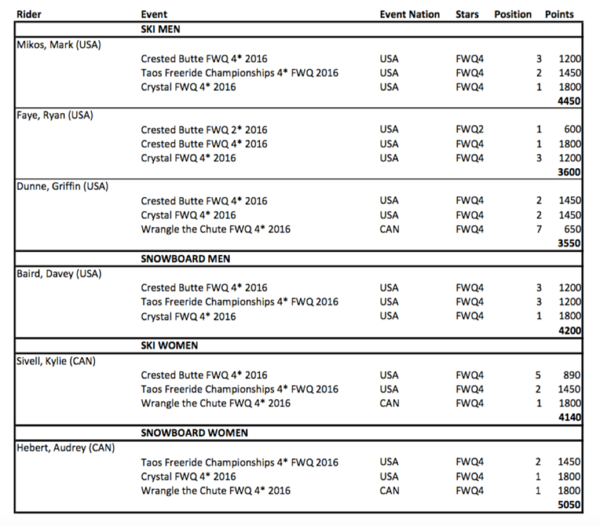 Watching the juniors compete this year is akin to having the unique opportunity to look into a time machine and see what the future of the sport will look like a few years down the road. The vibe of the international community of parents and coaches that comes together to support these young riders is as genuine and positive as the competitors’ future careers in the sport. With an explosively impressive season debut in Andorra at the Freeride Junior World Championships (FJWC), spectators were treated to a show that would give a full FWT competition a run for its money. The overall tour champions in the four disciplines, like their more senior FWT counterparts, were crowned in Verbier at the FJT by Dakine 3* to seal the envelope for a season that will be remembered for its intensity and spirit.

The international community of riders, fans, supporters, and organizers that united to support and advance the freeride community is proud to put a cap on another successful winter season on the FWT, FWQ, and FJT. During the summer months, make sure to stay up to date on the most current news concerning next year’s season including exciting new events and rider developments on freerideworldtour.com, Facebook, and Twitter.

For its 10th anniversary the Swatch Freeride World Tour reloads with a five-...