The news is now OFFICIAL! 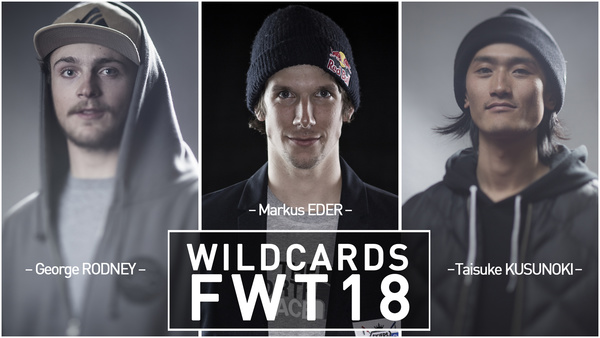 George Rodney (USA), Markus Eder (ITA) and Taisuke Kusunoki (JPN) will join the FWT18 game! The three skiers got a wildcard for the upcoming season of the Freeride World Tour. A good opportunity for us to ask them answer few questions about this season invitation.

George: To ski the Bec des Rosses from the top!

Markus: I feel like I haven’t been able to do my best and that’s my ultimate goal. If it’s enough for the win it’s even better.

Taisuke: My goal is skiing my best at FWT and making my riding evolved as good from other world-wide skiers. And reaching a podium is of course my final goal!

George: A back flip that’s bigger than the biggest straight air of the day.

Markus: This year was my first season of only filming and no competing at all, which was definitely awesome but the thing I’ve definitely missed is to be competing.

George: Couldn’t have been more stoked to see you win last year buddy. I was rooting for you from day 1. It's been a wild ride sense we first met at Snowbird years ago. Lets put on a good show this winter.

Taisuke: Congratulations for 1st prize on 2017! Let’s ski together next time, and looking forward to seeing your great line in next competition!

George: Aback flip that’s bigger than the biggest straight air of the day.

Markus: Those promises… Hmmm, I’d definitely like to go for a Rodeo 540!