Many of the movies presented are featuring FWT athletes who played a key part in their production, read through the full article to discover when, where and how to watch!

The International Freeski Film Festival (iF3) was created in 2007 as a result of a common idea shared by passionate ski industry veterans Felix Rioux, Doug Bishop, and JF Durocher. The idea was to create a film festival dedicated to screening freeskiing movies and expanding ski culture to new levels, the festival

stemmed from the need to unite all elements that compose freeski and freeride cultures in one place, including ski cinematography, producers, athletes, photography, brands, music, art and parties. iF3 searches, recognizes and rewards the best of what the freesports communities and spirit have to offer!

Currently iF3 is the biggest gathering of independent movie producers in skiing and draws producers, athletes, and event attendees from 20+ countries. Both fan participation and video submission has increased every year since the event’s inception. Since the first edition of iF3, the roster has grown from 11 professional and 5 amateur entries to over 100 professional and amateur films, shorts, documentaries, and webisodes in 2019.

IF3 is offering a varied program of over 80 ski and snowboard films and events in Chamonix (NEW), Montreal and Whistler!

"We have some great anticipated surprises this year such as Jess Kimura from Squamish, BC, who is coming back with a new production, after the success of her first two films. We have huge Canadian and American productions, shot in the mountains, out West and in the East, as well as plenty of great urban footage. European films will also have a strong presence this year, as well as several very interesting movies and short clips from Australia and New Zealand."

- Luc "Skypowder" St-Jacques, President of the iF3 Festival.

The complete film guide of this year's edition can be found on the Festival's web page: www.festivalif3.com

AN HYBRID FORMAT IN MONTREAL AND WHISTLER

Last year’s success for the live virtual screening is kept in this year’s line-up. In addition, the film screening evenings in various venues are back and will feature live entertainment with several athletes who have participated in the filming, both through their athletic prowess and as producers of spectacular images and exceptional content. 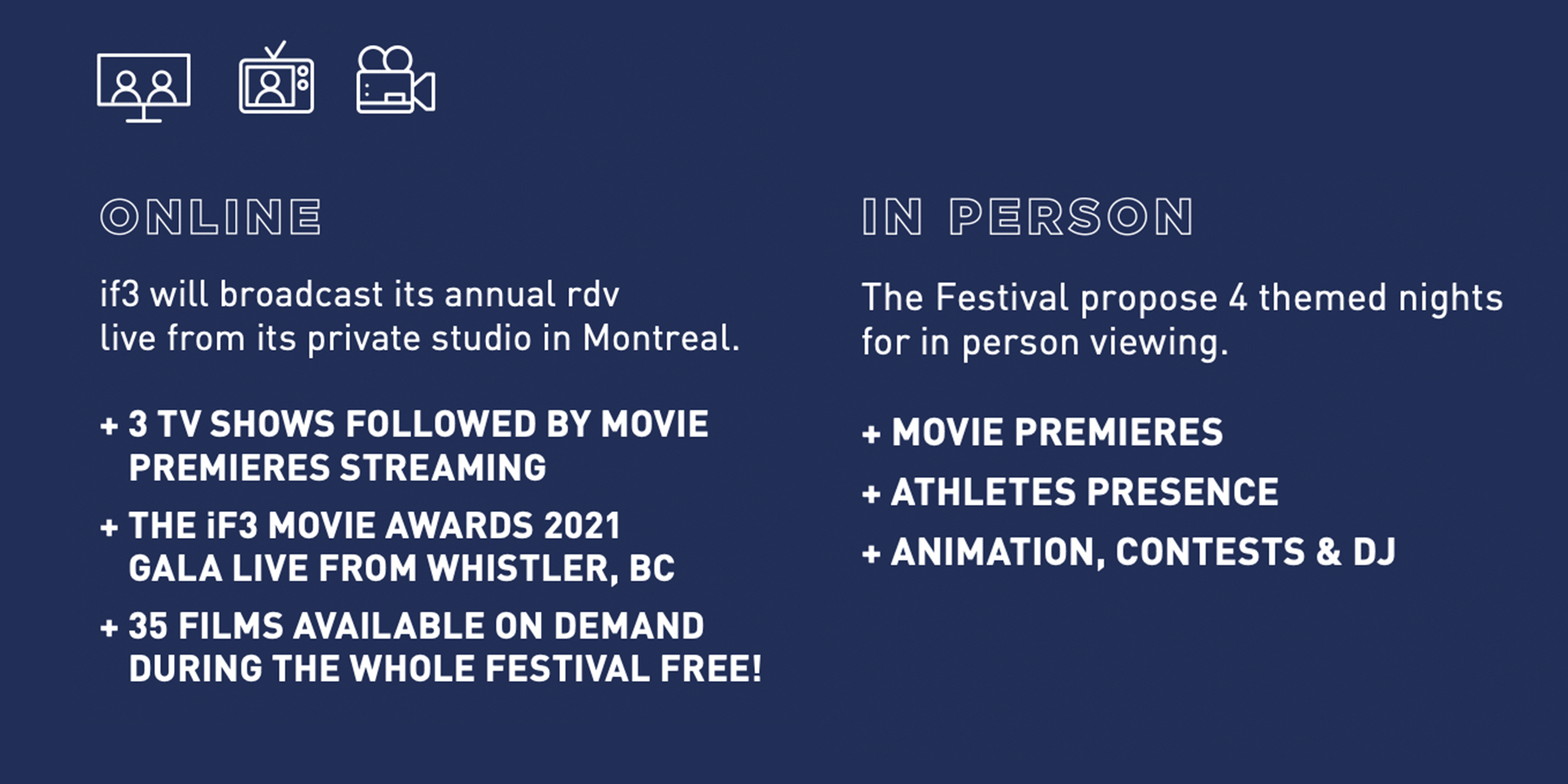 NEW THIS YEAR: THE PEOPLE'S CHOICE AWARD AND THE WHISTLER GALA

The jury will have the task of determining the winners, which will be announced on Saturday evening at the Gala. A new category is being added this year:  The People's Choice Award for one amateur and one professional film, especially since the public will be able to watch several films live from home and vote for their favourite.

Another first at the iF3 Festival, the Saturday night Gala held in Whistler, BC. This Gala will be broadcast live from the Ciné-Parc Belle Neige in Val-Morin, and some of the winning films will be shown to the public on site and online. 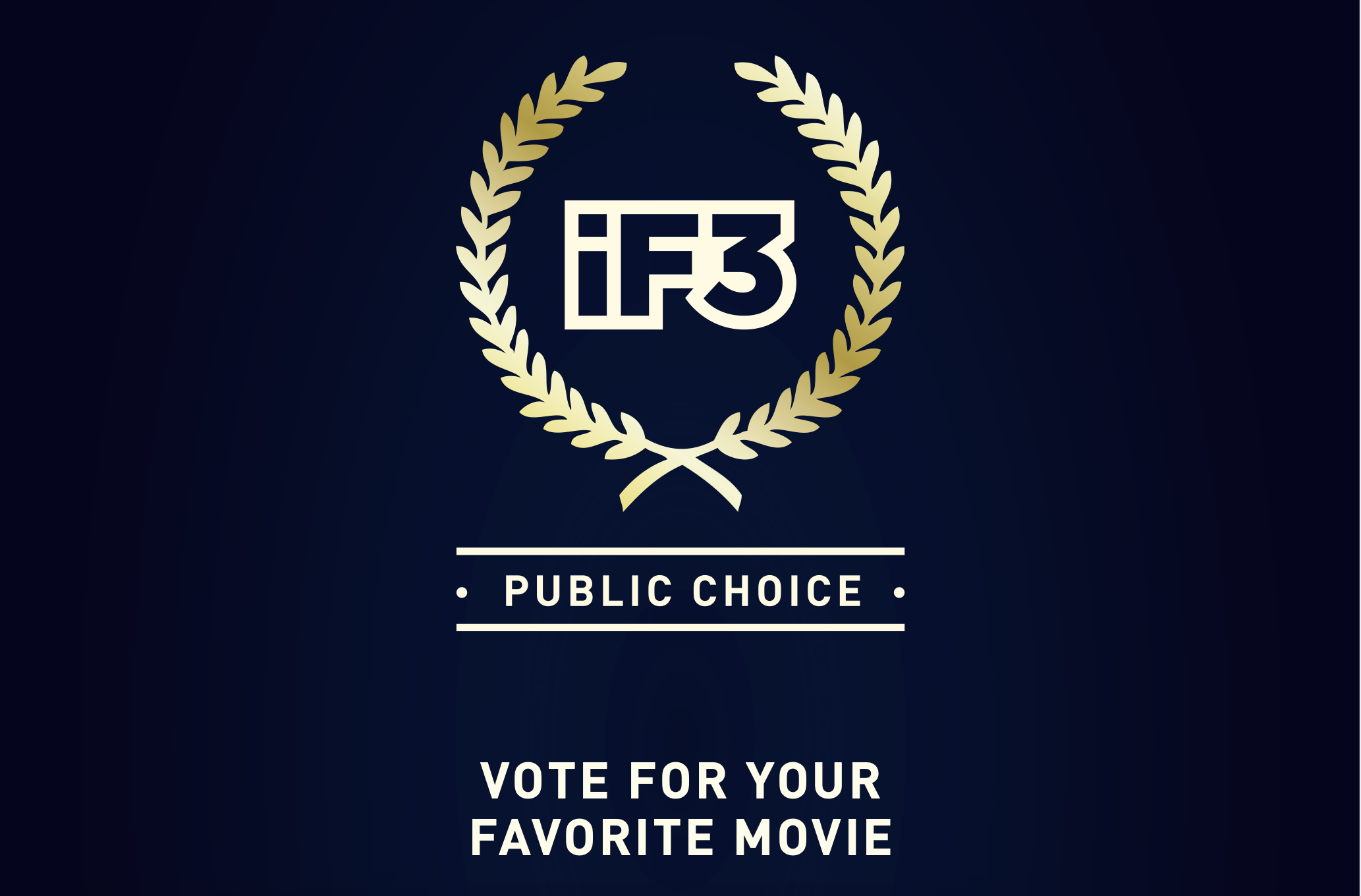 FWT ATHLETES FILMS YOU CAN WATCH AT THE IF3 FESTIVAL

Not only do our athletes compete all season in the Tour, but they also play a major aprt in some of the best films presented at this year's iF3 festival. We have listed 9 of latest and upcoming films featuring our athletes that you must watch, check out the full list if you haven't already!

Here are just some of the FWT riders movies you can watch at the iF3 festival:

THE STOMPING GROUNDS by MATCHSTICK PRODUCTIONS I ft. Hedvig Wessel and Logan Pehota

For decades, the pursuit of adventure, deep powder and massive spines has taken professional skiers like Mark Abma and Michelle Parker to the far reaches of the globe. As skiers, the desire to seek more and to escape is ingrained in our DNA. But that doesn’t mean our immediate surroundings don’t possess their own special treasures. Matchstick Productions brings to you their newest creation, The Stomping Grounds.

Polar Circle takes you on a journey through the history of Riksgränsen, narrated by Freeride World Champion Kristofer Turdell. This small village in the heart of the Swedish wilderness has over the years played an important role in not only Kristofer’s skiing career, but for the ski industry globally. Polar Circle portraits this magical place through the eyes of Kristofer and how the community around it has and still evolves the sport of freeride. 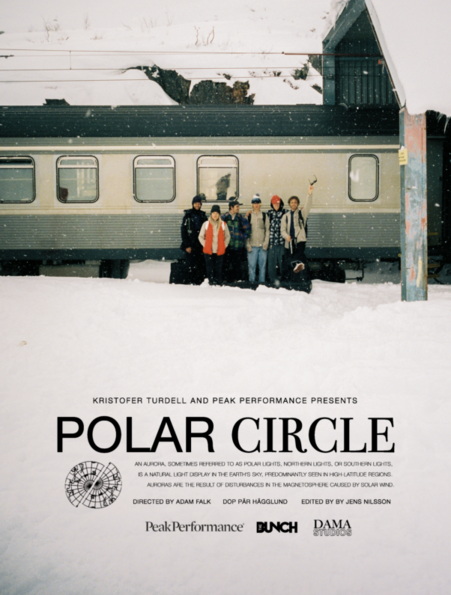 THE ARCTIC 12 by KOLLEKTIVE PRODUCTIONS I ft. ft. Reine Barkered and Jackie Paaso

In April 2021 a team composed of two couples, a pair of professional big mountain skiers, and two IFMGA guides set out on a 415km traverse above the Arctic Circle. The goal was to summit and ski all of the 2000 meter peaks in Sweden. This is an area where the tallest peaks are changing due to melting glaciers and new 2000 meters peaks are being discovered as recently as 2016. The journey will take them through what is often considered Europe’s last wilderness. The team will face the unpredictable weather of the Arctic, abnormally unstable avalanche conditions, and perhaps the biggest challenge, each other. If successful they could be the first crew to do so in one go during winter conditions.

Check out the complete film guide of this year's edition can be found on the Festival's web page: www.festivalif3.com

11 FWT ATHLETES FILMS TO LOOK OUT FOR

Not only do our athletes compete all season in the Tour, but they also play a...