Beartooth Basin hosted the first North American FWQ event of 2020 this June, with athletes dodging the threat of snow, wind, rain and lightning at this remote summer-only ski area perched on the Montana/Wyoming border in the Beartooth Mountains. This summer-only ski area remains unfettered by commercialism and is as a soulful place to ski as you’ll find.

The event was part of the Friends of the Beartooth All American Road (FBAAR) MadeMT Shredfest, an intimate mountain culture and community festival hosted by the non-profit FBAAR in partnership with tourism organization Yellowstone Country Montana, the Red Lodge Chamber of Commerce and the Red Lodge Community Foundation’s Roosevelt Center.

With Mother Nature threatening unsettled weather for the competition window of June 20 to 21, and the forecast looking increasingly challenging through the end of the week, organizers committee to the first potential comp day of Thursday, June 20. At first, the gamble looked to be a poor one as snow the night before led to the Beartooth Pass road being closed by “the authorities” at the state line. However, the team up at the ski area opened up the road for the athletes and event crew only, leaving tourists stranded but creating the opportunity to get the show on the road while the weather held out.

While the vibe was generally low-key, the competition was anything but, with spirited and intense runs taking the day, and plenty of big dogs on hand in both the men and women fields to ensure that the level of intensity was high.

For the lady boarders, Sheila Grindstaff took the win, ahead of Hailey Neutgens and Sharon Clouser. On the women’s two-plank side Ellie Oats ended up on top of a highly competitive field, followed by Addison Rafford with Tracy Chubb rounding out the podium. 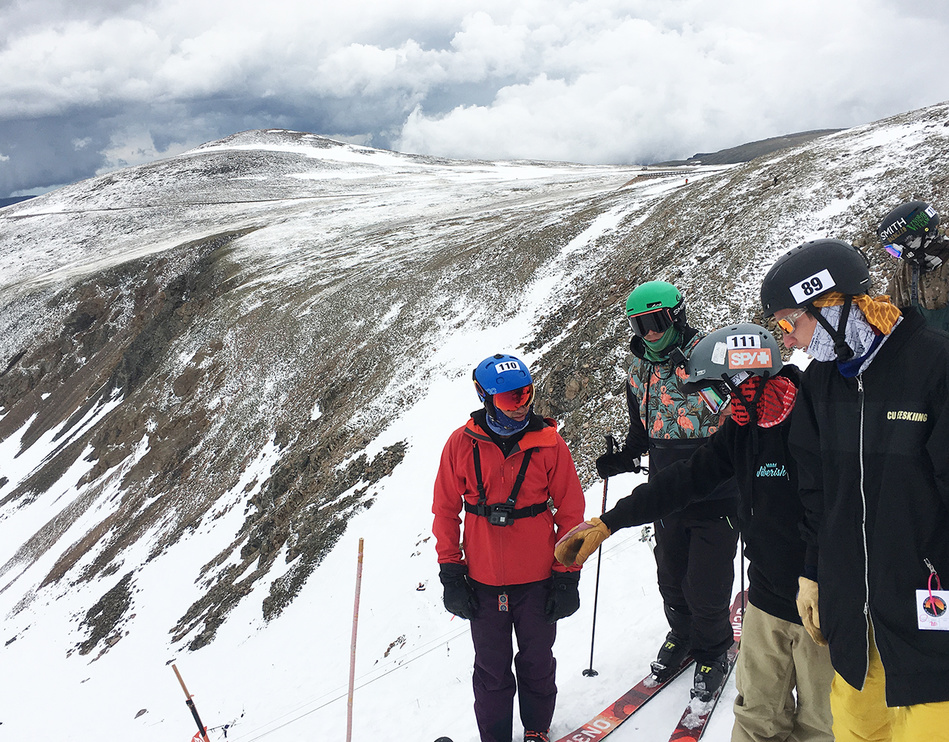 Photo (c) Tomwintermedia - Athletes at the start. The snow remained firm and the drop in technical at this year’s Beartooth 2* comp.

For the guys, it was more of the same as last year’s snowboard champ Holden Samuels took the win for the second year in a row. He was followed by Roger Carter (who deserves additional props for the fact that Carter also competed in the ski division, finishing 5th) and Brazilian rider Luiz Peres De Oliveria. For the two-plankers, Andrew Rumph took the win with a run that gave him a skinny 0.2 margin over second place finisher Chase Samuels. Davis Bedient wrapped up the podium spots in 3rd.

With the Beartooth event done and dusted, all eyes now turn to the Southern Hemisphere as the summer moves into full swing in North America.