It is that time of year again, where we announce the names of the 12 rookies qualified for the FWT21

Athletes from around the world have spent their season fighting for a place on the FWT21. With only 12 places up for grabs among the world’s best, the competition in the two Freeride World Qualifier regions was relentless. Region 1 (Europe / Oceania Asia) and Region 2 (Americas)

After the cancellation of all remaining FWQ competitions on Friday 13th March, the overall qualification rankings have been stopped. We are proud to announce the names of the 12 athletes who have officially gained enough points to join the FWT21.

Six skiers will join the FWT21 line up: The top 3 from each of the qualifying regions. 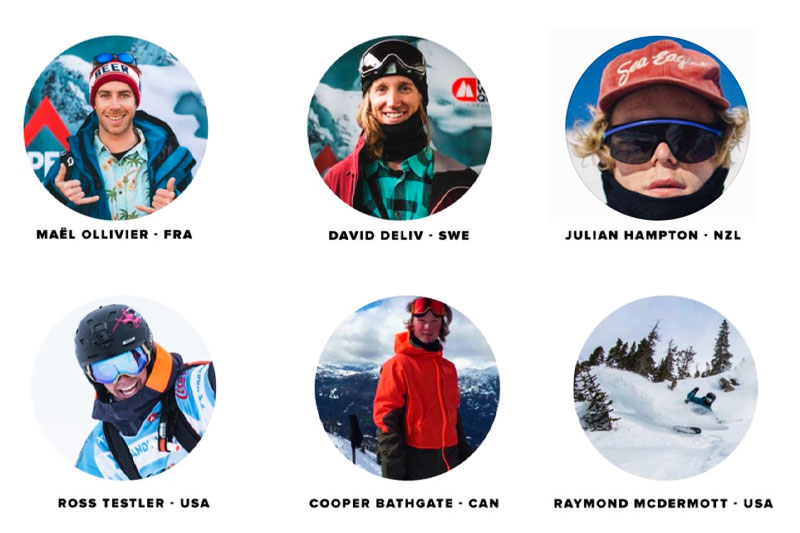 Originating from La Fou d’Allos, the skier Maël Ollivier (FRA - 1st FWQ Region 1) showed strong technical performances during the 4 star qualifying competitions at La Rosière and Montafon. After 2 years on the FWQ, David Deliv (SWE - 2nd FWQ Region 1), the Swede, originally from Åre,   also wins himself a spot on the Tour. They will be joined by Julian Hampton (NZL - 3rd FWQ Region 1), the Kiwi from Mont Olympus and winner of the 4 star North Face Frontier, he swill also be joining his friends Craig Murray, and Blake Marshall who are already on the Tour.

For several years, Ross Tester (USA 1st FWQ Region 2) has been working his way up the ‘Freeride pyramid’. He first made his mark by winning the North American Junior Circuit, and the Junior World Championships in Grandvalira in 2017. However, Ross is not the only Junior to have become a master. He will be joined by Cooper Bathgate (CAN - 2nd FWQ Region 2), the padawan of coach and FWT commentator Derek Foose, he also was close to qualifying for the Tour last year. Raymond McDermott (USA 3rd FWQ Region 2), winner of the Kicking Horse Golden BC 4* and with a style that comes straight from the Arapahoe Basin, Colorado,  will complete the list of rookie skiers who will join the Tour.

Two ski women will qualify for the FWT21: The first place finishers in regions 1 and 2.

Zuzanna Witych (POL - 1st FWQ Region 1), is the proof that passion for freeriding knows no bounds. Born far from the mountains in the town of Lodz in Poland, Zuza, as her friends call her, will qualify for the most elite of freeride competitions. At her side will be Tracy Chubb (USA - 1st FWQ Region 2), who put in strong performances in North America such as her win in the 4* Kicking Horse Golden BC comp.

Two snowboarders qualify for the FWT21: The two winners of each region.

After 2 winters on the North American qualifying circuit, the frenchman Hugo Serra (FRA - 1st FWQ Region 1) will be joining the FWT21. Alongside him, Michael Mawn (USA - 1st FWQ Region 2), former competitor in half pipe, and a rider who has strong technique and excels in all types of mountain terrain.

Two snowboarders qualify for the FWT21: The two winners of each region.

The Kiwi Claire McGregor ( NZL - 1st FWQ Region 1), based in Verbier is experienced on the FWQ circuit and dominated throughout the season with 3 victories. The Canadian Katie Anderson (CAN - 1st FWQ Region 2) will be able to finally make her first turns on the Tour this year, after coming so close to qualifying for the Tour in 2019.

After the 2020 season, notable for extraordinary performances throughout, and a clear progression of the sport; the list of FWQ riders qualified for the FWT21 is complete.

Make sure to stay tuned to the FWT and FWQ social platforms as well as to www.freerideworldtour.com to stay up to date with every development while waiting to see how the world’s best rookies will stand up to the pros next year!

Congratulations to our FWT20 World Champions! From Hakuba to Fieberbrunn,...