A Look Back at Taos Freeride, The Oldest FWQ Competition in the Americas

Registration is now live for the oldest Freeride World Qualifying event in the Americas, Taos Freeride. So, with this in mind and to celebrate over a decade of freeriding in New Mexico, we thought it might be nice to take a walk down memory lane and look at the history of this venerable competition.

“The concept for the event was first proposed to Taos in 2004,” says Tom Winter, current Freeride World Tour Americas Manager who fast-talked the resort into buying into the idea. “I had organized the Colorado Freeride Championships at Berthoud Pass in 2000 and 2001, but Berthoud closed and so we moved over to Snowmass. I visited Taos for a magazine story with a couple of athletes and it was obvious that they had amazing venues and a ton of potential. We skied around for an afternoon with Chris Stagg, the Mountain Manager looking at the terrain and somehow he thought that I knew what I was talking about.”

Held in mid-February, the competition’s timing coincided with an unusually wet and intense three-day snowstorm that played havoc with the schedule. The upside was that competitors got an up close and personal taste of just how good Taos’ steep terrain could be during prime conditions.  When the comp finally did go off, Aspen’s Kiffor Berg etched his name in the history books with a massive air off of a previously unskied cliff in the Bamboo Nose area of the West Basin venue. The rock is still referred to as Kiffor’s Nose. 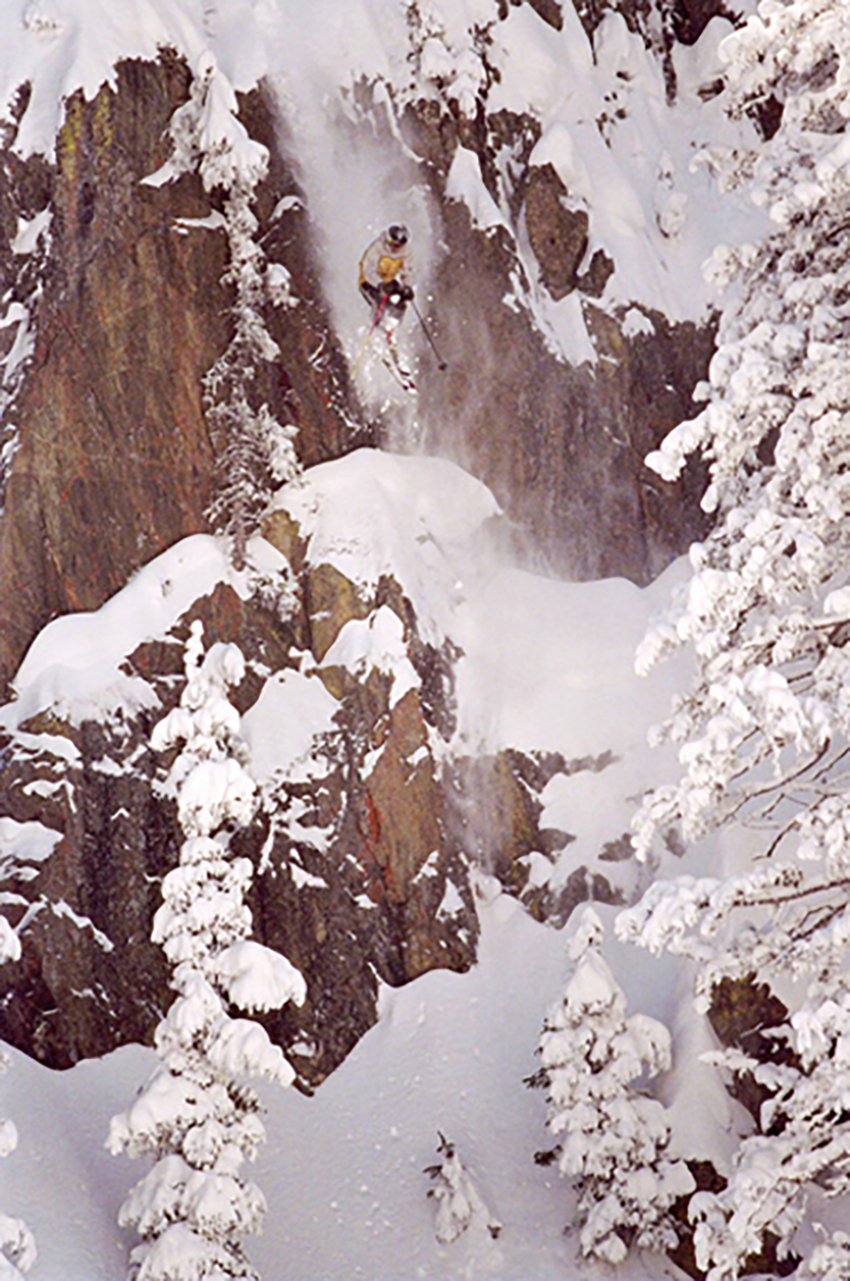 Link: Even the Utah contingent was impressed with Taos, as evidenced by this 2005 tread about the event on the TGR forums: http://www.tetongravity.com/forums/showthread.php/24990-Taos-Comp

In 2008, Taos local Katie Gillen would start dominating the female division. Finishing second that year, she’d go on to post numerous podiums and top ten finishes in subsequent years, her primary sponsor being “the Chocolate Factory” an establishment located at the base of the ski area and owned and operated by her parents.

The event also added Junior athletes in 2008, who competed on the same venues as the adults. “Big mountain events were really blowing up and ski clubs were starting to add the discipline to their programs,” says Winter. “The idea was to give the kids the exact same experience as the big dogs. They’d compete on the same venues, go to the same awards party, really be made to feel like they were part of the comp and not an afterthought. The best part was we made them hike the peak, I don’t think they were ready for that!” 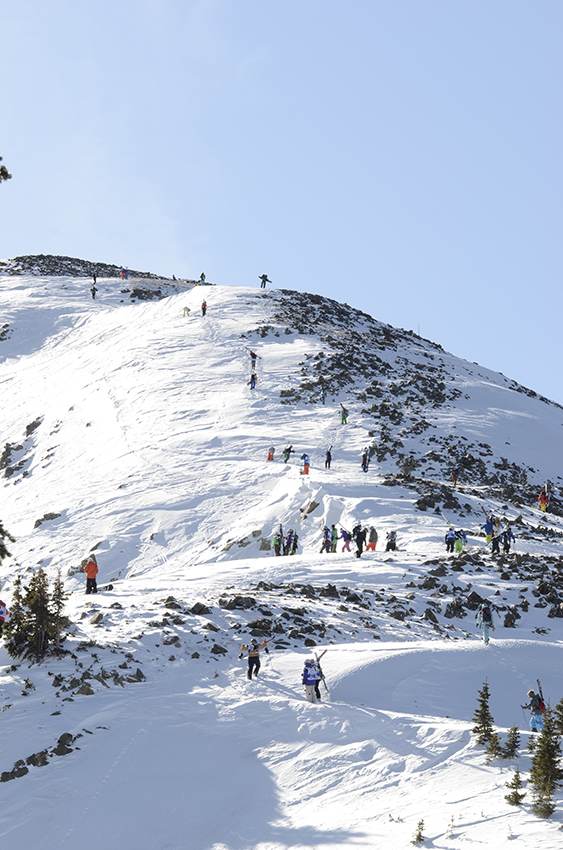 2008 Image: Kachina is the difference maker in Taos athletes hike it twice, once for their inspection and again to compete.  Photo: Tom Winter

2009 – Taos Becomes The First FWQ Event in the Americas

In 2009 Taos was invited to become one of a handful of 4* Freeride World Tour Qualifying  (FWQ) events globally. The opportunity was a turning point for the competition.

Taos’ new status as a FWQ 4* proved to be a draw for several top Europeans, with Lorraine Huber (Austria) taking the third spot for the girls, followed by Karine Falck-Pedersen (Norway) in 5th. French athlete Julien Lopez finished in 4th for the men.

2009 also saw the first appearance of a snowboard division, with snowboard athletes allowed to compete in the event prior to the official opening of Taos to the general snowboarding public. 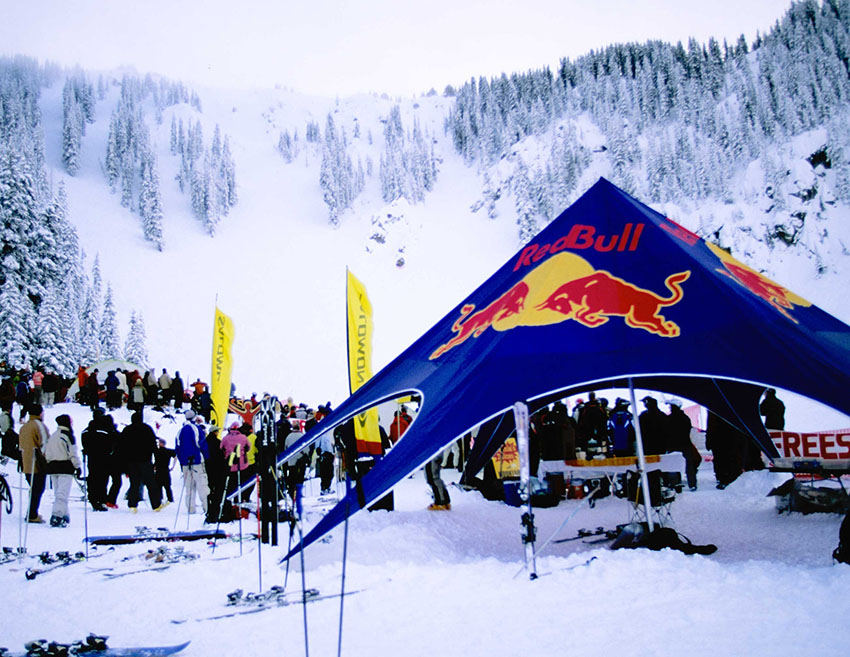 2009 Image: Red Bull was a supporter from the start, and their tent still dominates proceedings in the West Basin venue. Photo: Tom Winter

In 2011 when the FWT decided to split the women’s events from the men and Taos was named one of four top-tier events for the girls, raising the stakes for the athletes. For the men, the event remained a 4* FWQ stop, the only one in North America. These developments and the growing potential for a unification of the European based Freeride World Tour and the North American Freeskiing World Tour meant that in 2011 Taos saw more top athletes than ever, including Angel Collinson. Collinson would take 2nd in Taos and go on to finish 2nd overall on the Freeride World Tour.

2011 was also the year that the decision to host juniors was justified. Former junior athlete Brandon Claubaugh stepped up into the adult division this year and immediately made an impact by finishing 4th. 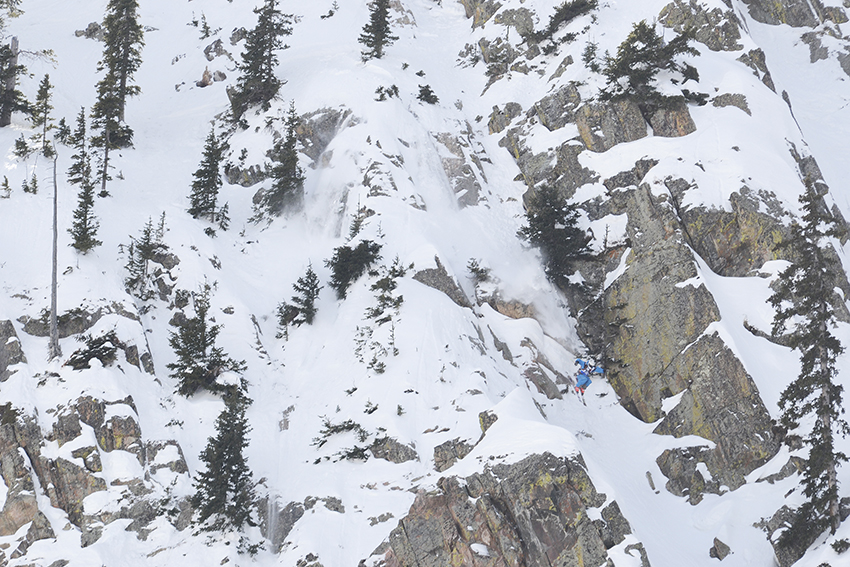 2011 Image: Brandon Claubaugh proving that his success in the junior division was no fluke. This line on the Kachina Peak venue in 2011 left him in 4th overall, just off of the podium.

Link: Snowboarder Dave Watson’s POV of his Kachina Peak run in the finals. Its’ all going quite nicely until a rock intervenes: http://www.youtube.com/watch?v=Gwt4x8EGRLw 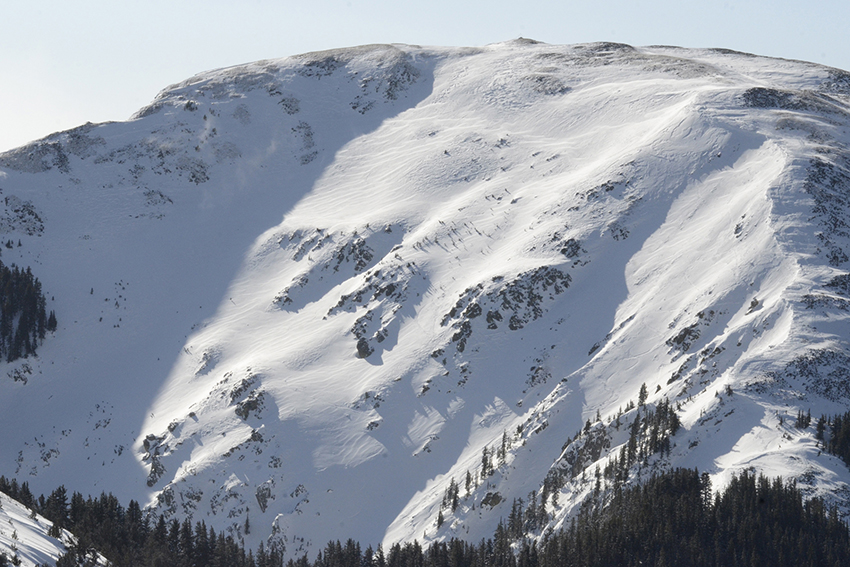 With the southern storm flow on and Taos’ venues stacked with snow, this northern New Mexico ski area celebrates 12 years of Taos Freeride, the oldest and, one of the best FWQ events in the United States. Many other competitions try to match the unique athlete-centric vibe of Taos, but few can equal the amazing vibe that participants get to experience that is Taos Freeride. Learn more about all that makes this FWQ event special here: http://www.skitaos.com/freeride/