The road to FREERIDE WORLD TOUR (FWT) is a challenging yet rewarding path, that many FREERIDE WORLD QUALIFIER (FWQ) athletes around the world engage themselves on each year to reach the ultimate summit: a spot on the FWT.

The circuit of FWQ 4* events (the most points-rewarding events) is where the magic happens, where the competition is real and the level high. Only the top 3 ski men, top 1 ski women, top 1 snowboard men and top 1 snowboard women per region (Region 1- Europe Oceania Asia and Region 2 - Americas) based on the overall FWQ rankings will make it to FWT 2020!

Follow LIVE the final 4* event of the season goes down at the OPEN FACES OBERGURGL-HOCHGURGL in Austria on April 6-9, just after the KIRKWOOD 4* in USA on April 4-6, 2019!

Who's in the lead? 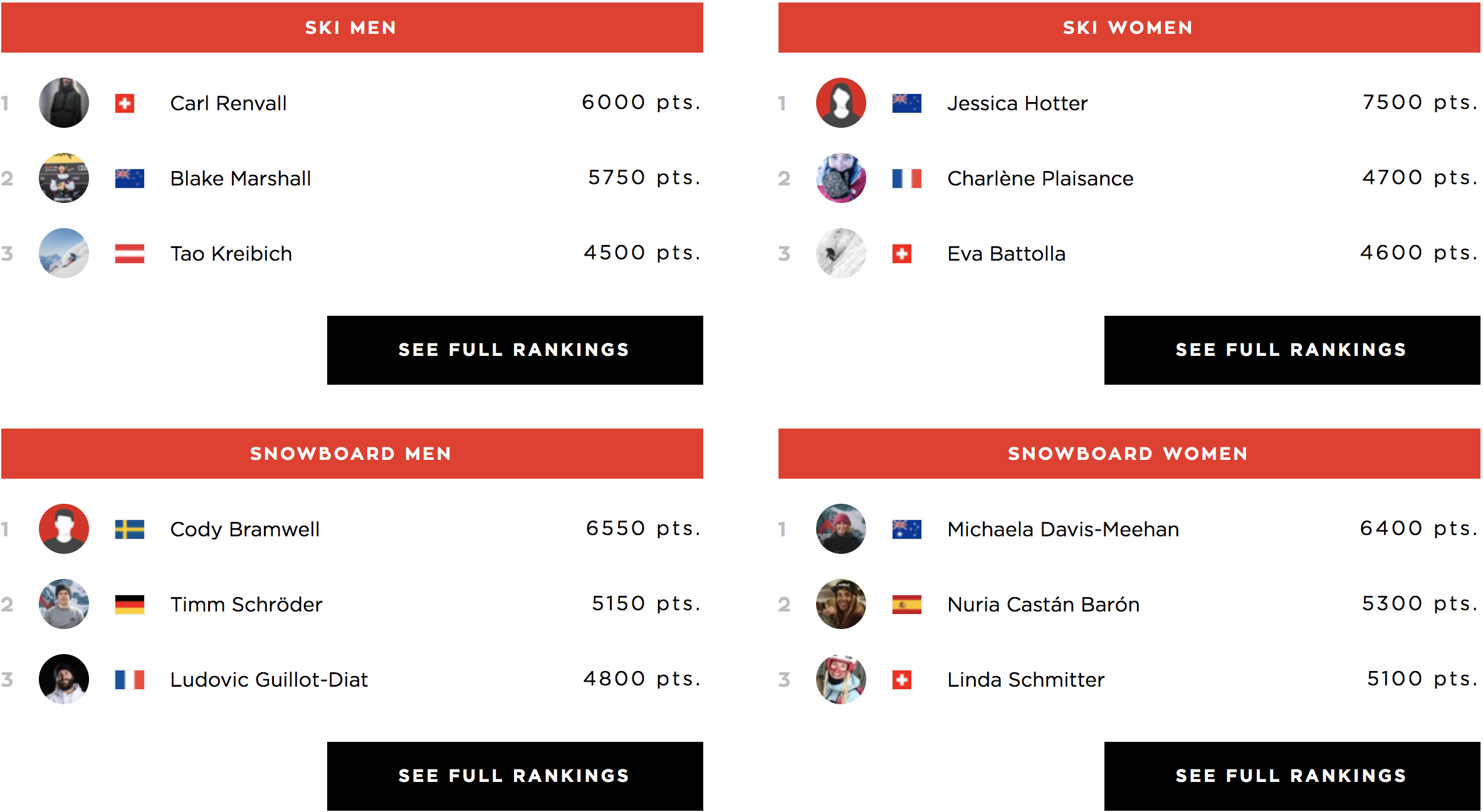 In the women's category, skier Jess Hotter (NZL) has already made her dream of FWT come true by taking the third 4* win of the season at the recent Nendaz Freeride by Alpride event.

In the snowboard category Cody Bramwell from Sweden is back strong again, finishing second last year and almost qualifying for the FWT and already taking 2 wins this year with Timm Schröder (GER) and Ludovic Guillot-Diat (FRA) in second and third place who still have a chance to challenge him at the final 4* event.

In the snowboard women category Michaela Davis-Meehan (AUS) took a big step towards FWT 2020 with her recent win in Nendaz, with a final showdown between her, Nuria Castán Barón (ESP) and Linda Schmitter (SUI) at the last 4* event in Obergurgl-Hochgurgl. 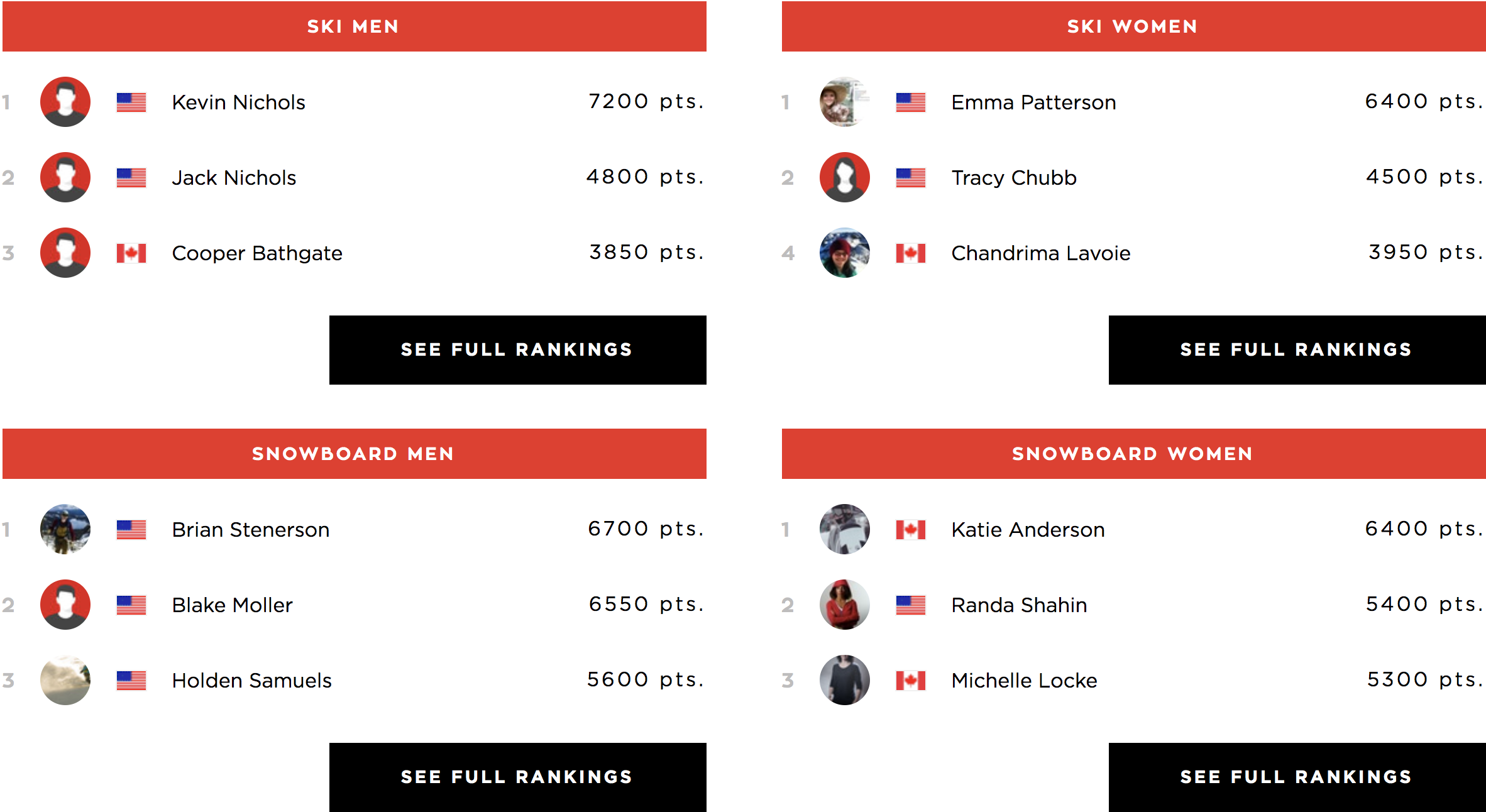 Two pairs of siblings are currently leading the Ski Men rankings: Kevin Nichols from USA is already qualified after a strong season while his brother Jack and the twins Cooper and Jackson Bathgate (CAN) from Whistler are currently all in in a good position to make FWT 2020 after the latest Kicking Horse 4* competition.

Emma Patterson (USA) dominated the season with 1 win and 2 podium finishes at 4* events this season which already makes her qualified for FWT 2020!

All eyes on Brian Stenerson (USA) from Tahoe and Blake Moller, brother of FWT19 athlete Grifen Moller who will battle it out for a spot on FWT in Kirkood, while Holden Samuels (USA) needs a win for a chance to make FWT.

With 2 first place finished and one third place result Katie Anderson (CAN) is on the way to make FWT 2020, but can still be challenged by Randa Shahin (USA) and Michelle Locke (CAN).

What happened so far?

With eight out of eleven 4* events of the season already in the books, let's look at the this season's results:

Follow LIVE ON WWW.FREERIDEWORLDTOUR.COM this Saturday from 9:30 CET when the final 4* event of the season goes down at the OPEN FACES OBERGURGL-HOCHGURGL in Austria, while the KIRKWOOD 4* happens about the same time in USA!

Stay tuned on www.freerideworldtour.com for updates on the Freeride World Qualifer events and results!