THE ROAD TO THE FWT21

Competing in Freeride World Qualifier Competitions all around the world, athletes are fighting for one of the few renowned spots on the Freeride World Tour!

The circuit of FWQ 4* events (the most points-rewarding events) is where the magic happens, where the competition is real and the level high. Only the top 3 ski men, top 1 ski women, top 1 snowboard men and top 1 snowboard women per region (Region 1 - Europe Oceania Asia & Region 2 - Americas) based on the overall FWQ rankings will make it to FWT 2021!

These riders are currently sitting in the hot seat: 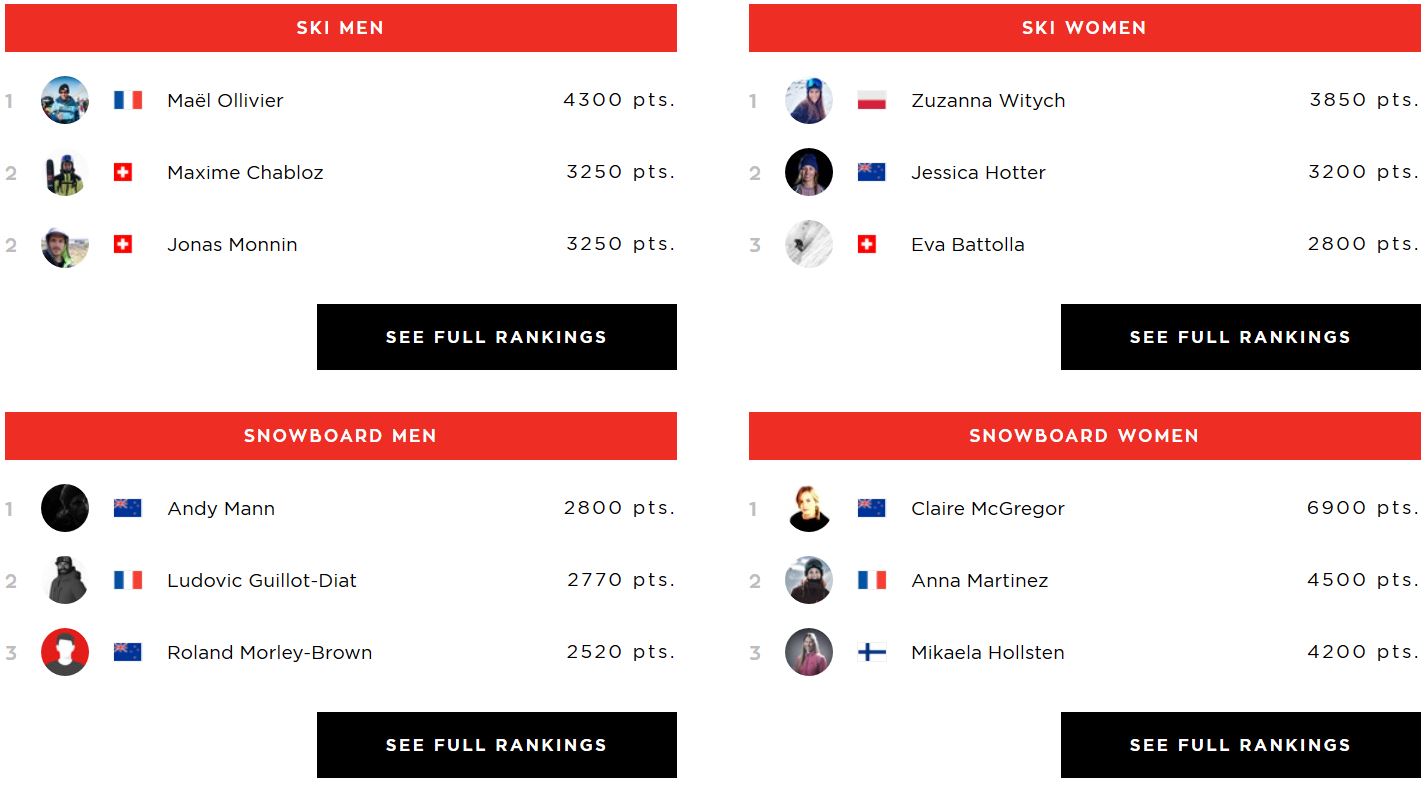 The Frenchman Maël Ollivier is currently leading with a win at the La Rosière 4* and two 5th places (4* & 2*) from the Kiwi tour this summer. But two Swiss guys are hard on his heels: Maxime Chabloz, FWQ rookie and Freeride Junior World Champion 2019, earned himself a 4th place at the La Rosière 4*, followed by a 2nd place at the Engadinsnow 3* and a win at the Verbier Freeride Week 2* #1. Jonas Monnin is also sitting in second, earing the vast chunk of his points in La Rosière as well, where he came 2nd at the 4* and won the 2* competition.

Zuzanna Witych from Poland earned herself the top spot with a win in at the La Rosière 4* and two 2nd places at the Vars 3* and the Les Arcs 2* #2. She's being chased by Eva Battolla for Switzerland and Sanne Mona form Sweden.

Andy Mann is currently in front thanks to decent results at home in New Zealand and in Canada. But Ludovic Guillot-Diat from France is closing in on him followed by another Kiwi Roland Morley-Brown.

Another Kiwi sits on top of the snowboarders and she will be hard to beat. Claire McGregor has already sealed two 4* wins (La Rosière & Les Arcs) alongside a second place at the 4* of The Remarkables. The French FWQ rookie and Freeride Junior World Champion 2019, Anna Martinez, would have to win at least two of the remaining 4* events to catch up. 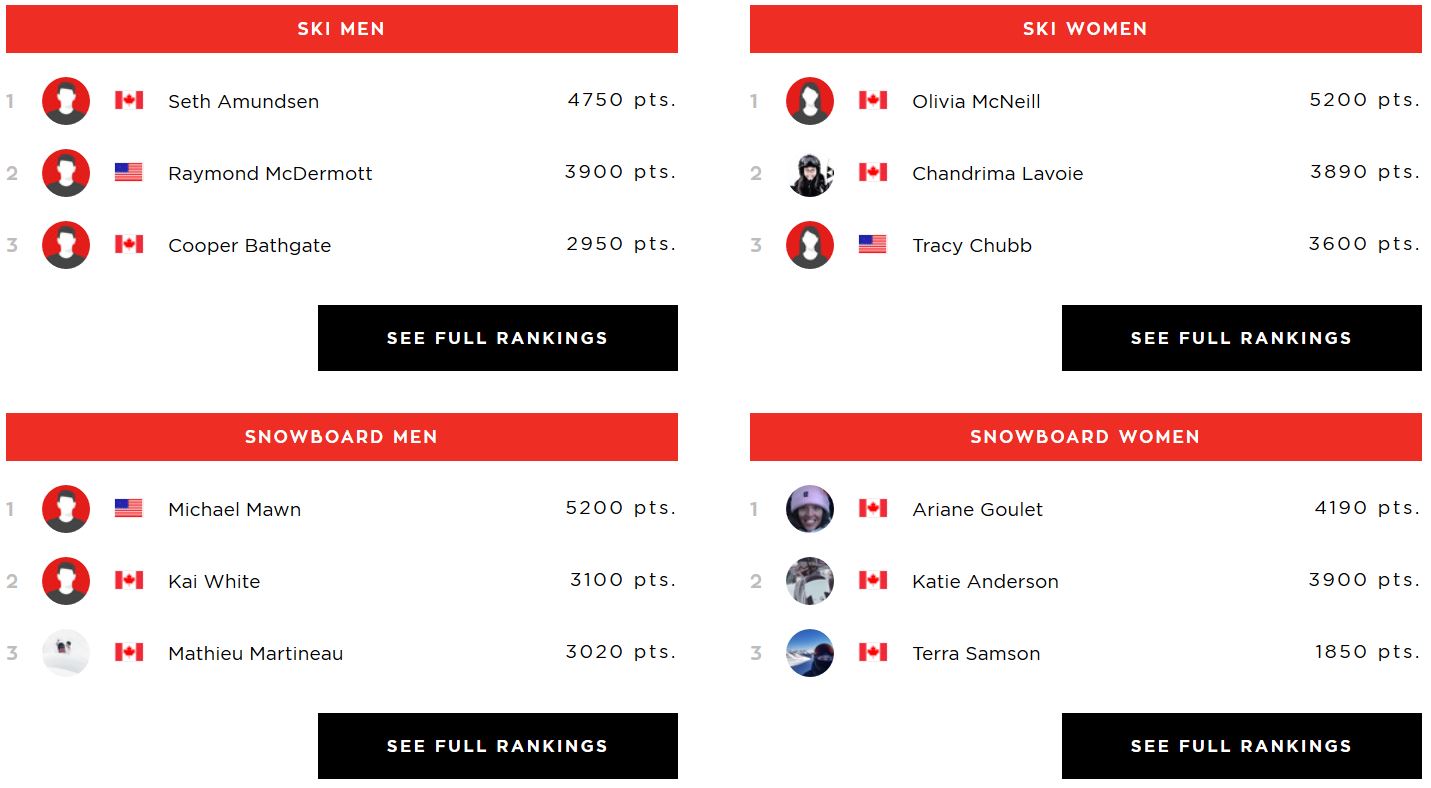 At the moment the Canadians are leading most of the ranks, with Seth Amundsen in ski who got 2nd at the Revelstoke 4*, 1st at the 2* and 3rd at the Kicking Horse 4*. He is followed by the American Raymond McDermott who won in Kicking Horse and his fellow countrymen Cooper Bathgate who came first in Revelstoke.

Olivia McNeill is ahead for the women after to a 2nd, 3rd and 5th place at the 4* in Revelstoke, Kicking Horse and The Remarkables. She is being chased by Revelstoke's winner, Chandrima Lavoie, who is also from Canada and Kicking Horse's winner, Tracy Chubb, from the US.

Michael Mawn is the only American in the hot seat, after a win at the Kicking Horse 4* and the Revelstoke 2* as well as a 2nd place finish at the Revelstoke 4*. He's sitting comfortably in front of the two Canadians Kai White and Mathieu Martineau who took the win in front of Mawn in Revelstoke.

What happened so far?

With five 4* events of the season already in the books and eight more to go, there's still a lot that can change!

Next 4* competitions take place in Silvretta-Montafon on Feb 15-18 and in Taos on Mar 5-6!

Stay tuned on www.freerideworldtour.com for updates on the Freeride World Qualifier events and results!