The most prestigious and intimidating competition face in the world hosts the spectacular final stop of the 2016 Swatch Freeride World Tour and brings the 2016 season to a momentous close as the world champions of the five-stop tour revel in victory. 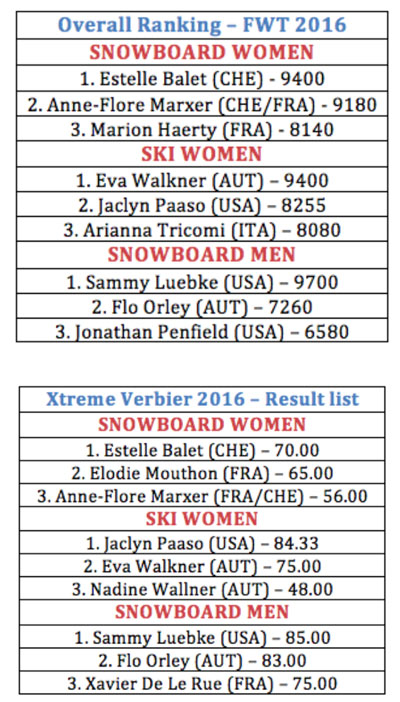 The steep and unforgiving Northeast face of the Bec des Rosses, towering to 3233m above the popular Swiss ski resort of Verbier, is often considered the gatekeeper to the prestigious title of world champion on the Swatch Freeride World Tour. The legendary venue hosted the 21st edition of the world championship in the seminal event that is often credited as giving birth to the freeride movement.

Three wild card riders combined with the 27 remaining qualified riders from the five-stop tour after the final cut-off in Haines, Alaska last week made their way back across the Atlantic for their last possible opportunity to contend for the world title. After a dramatic season full of surprises and shake-ups, the champion was crowned in three categories based on their best four results this season.

Sammy Luebke (USA – Snowboard Men) already solidified his title at the previous competition in Haines, Alaska and was joined by newly crowned world champions Eva Walkner (AUT – Ski Women) and Estelle Balet (SUI – Snowboard Women). Due to high winds and low visibility on the Bec des Rosses, the ski men category was unable to run and is rescheduled for tomorrow, Sunday, April 3 at 9:15 am CEST.

Riders hiked and climbed their way up the  exposed ridge leading to the summit of the competition venue early this morning amid challenging visibility and fleeting light with strong winds. A generous yet tardy winter season produced plentiful snowfall for the Valais region of the Swiss Alps, with unique weather patterns and winds depositing snow on the peak where it had been absent in years past.

The women’s venue departed from two alternate start gates on the Petit Bec and offered female competitors beautifully appealing spines and couloir features with excellent snow and clean cliff landings. The intimidatingly steep summit pyramid of the Bec des Rosses challenged male riders with cryptic and technical line entrances to more forgiving slopes below where a multitude of cliffs offered competitors ample opportunity showcase their talents in the air.

It was neck-and-neck for Estelle Balet (SUI – 1st Place Xtreme, 1st Overall) and her compatriot Anne-Flore Marxer (SUI/FRA – 3rd Place Xtreme, 2nd Place Overall) throughout the 2016 season. There was little doubt that Marxer turned up the volume today with an unabashedly aggressive line featuring an impressive 360 which was ultimately marred by a loss of control in her landing. Balet’s fast and fantastically exposed line demonstrated her determination to take the prestigious double title from Marxer.  Frenchwoman and experienced tour rider Elodie Mouthon (FRA – 2nd Place Xtreme, 4th Place Overall) was able to best the young but powerful Marion Haerty (FRA – 4thPlace Xtreme, 3rd Place Overall) despite a slight miscalculation near the top of the venue. Haerty will nonetheless be proud to stand on top of the podium after a season full of lines featuring a consistently creative riding style that will define a new generation of female snowboarders on the tour.

It’s always exciting to watch Jaclyn Paaso’s (USA – 1st Place Xtreme, 2nd Place Overall) interpretation of a competition venue with her propensity for huge airs and heavy lines – which is exactly what earned her first place today. Yet it was Eva Walkner’s (AUT – 2rd Place Xtreme, 1st Place Overall) Austrian precision and calculated risk-taking that allowed her take the overall title with strong riding all throughout the 2016 season and a respectable line where her racing background came into use as she charged variable snow conditions. It was inspiring to see how newcomers like Arianna Tricomi (ITA – 5th Place Xtreme, 3rd Place Overall) can compete at the top levels on their first year on the Tour and secure a top-three finish despite a lackluster performance today. Former world champion Nadine Wallner (AUT – 3rd Place Xtreme, 4th Place Overall) was content with her ability to podium despite returning from a serious injury and being nudged off the world champion podium by Tricomi.

It was a memorable day for the snowboard men category as Sammy Luebke  (USA – 1st Place Xtreme, 1st Place Overall) solidified his status as one of the most legendary riders to grace the Tour, with an incredibly technical line down the middle of the face with huge stomped airs, permitting him to culminate his incredible season with a double victory. Flo Orley (AUT – 2nd Place Xtreme, 2nd Place Overall,) also had a justifiably satisfying end to his season as the 40-year-old demonstrated his experience and power after he stomped one of the most impressive lines of the day all while donning a gorilla suit. A man that has triumphed many times before on the fabled face, Xavier De Le Rue (FRA – 3rd Place Xtreme), showed the world why his reputation precedes him as he gave his privileged wild card the honor it deserves with his trademark charging. Despite rookie Jonathan Penfield’s (USA, 7th Place Xtreme, 3rd Place Overall) less-than-desirable result in Verbier, he still managed to secure the last spot on the overall champion podium despite a loss of control during his run.

Riders rejoiced at the on-mountain prize giving at the Col des Gentianes (2950m) before making their way back to Verbier Village to celebrate their hard-earned and often emotional victories on the epic international journey of the 2016 competition season. The terminal stop of this year’s Swatch Freeride World Tour produced some of the most memorable and innovative lines ever witnessed in the two-decade history of the event. The take-home message of today’s event was undoubtedly the highly-refined talent and progression of the sport of freeride which was evident in the consistently strong riding styles of the top-scoring athletes.

Do not miss out on the exciting conclusion to the ski men category tomorrow on the Bec Des Rosses! The greatest skiers in the world are hungry for victory after the challenging weather conditions today resulted in the postponement of their category. Catch the final chapter of the 2016 Swatch Freeride World Tour tomorrow on www.freerideworldtour.com and Redbull TV!

As the memorable 2016 season comes to a close, freeride fans can relive any of today’s lines with the rider tagging system on the replay of the webcast, available now on freerideworldtour.com and Red Bull TV.