Two experienced riders will join the FWT2022 roster of world class athletes: the chilian snowboarder Manuel Diaz and american skier Lexi Dupont. They made a name for themselves by exploring the world and engaged in the most exposed lines. Stars of movies, Manuel and Lexi will without any doubts, add some spicy to the Freeride World Tour 2022. 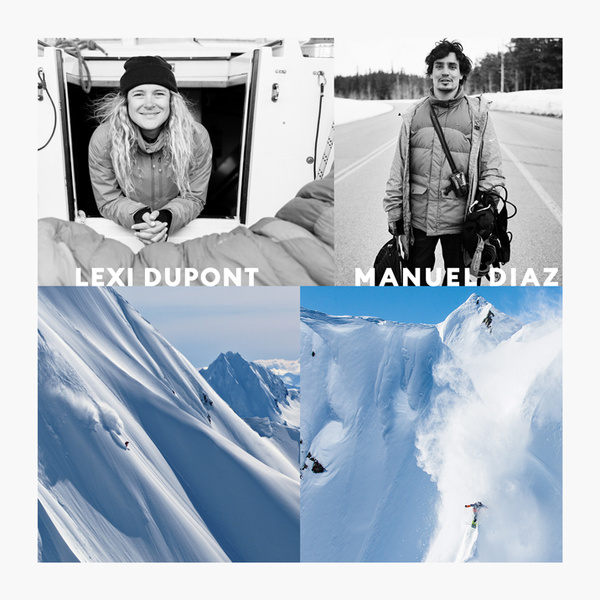 Lexi duPont is a professional skier, adventurer and outdoor enthusiast. The Sun Valley native dawned her first skis at the age of two, focusing initially on ski racing before catapulting into the world of big-mountain skiing. A former Junior Olympics competitor and Freeskiing World Tour contender, Lexi is a member of Eddie Bauer’s First Ascent team and the Global K2 Ski Team who tackles mountains with a rare balance of grit, grace and effervescent determination. Her career has been marked with notable first descents in the Arctic Circle’s Northernmost Tip of Svalbard Norway and across Southeast Alaska, as well as starring roles in ski films, including Warren Miller’s Wintervention and the all-female documentary Pretty Faces. An advocate for Mother Earth and the role of women and girls in sports, she has taken part in humanitarian missions in Kyrgyzstan, Tanzania and Cambodia.

When she’s not chasing powder, Lexi can be found sailing, surfing, climbing, practicing yoga or relaxing in her 500-square-foot geodesic tiny home. She recently earned her pilot’s license, citing the sky as her next area of exploration.

"When I received the invitation to be the "Wildcard" for The Freeride World Tour 2022, my heart jumped into my throat. I was humbled, and honored and a little nauseous all at the same time. I guess you could call me the Wildcard Rookie because it has been so long since I have been in the starting gate. Since I left the contest world, I have never stopped progressing. I am fully dedicated to the growth of women's big mountain skiing and every season I strive to push my limits in the film world, chasing snow to the far corners of the earth."

Born and raised by ski instructors in Farellones, Chile, Manuel Diaz first made his way to Stevens Pass, WA at the age of 14. Diaz has made a name for himself through his humble demeanor and freestyle abilities in natural terrain—skills that brought him to Alaska in the spring of 2012 to film with Absinthe and Pirate Movie Productions. From the Andes to Alaska, Diaz is betting on the life he loves—and redefining Chilean snowboarding in the process.

Manuel’s roots in the Chilean Andes show in both his skills and his personality. The son of ski instructors and brother of two professional freeskiers, his mountain sense comes naturally. He’s genuine, funny, and, with a soft voice and thick accent, impossible to understand over a two-way radio. When he shows up at the hill, he’ll take time to shake every single person’s hand. Even if there are 20 of us, riding can wait.

"Thank you Freeride World Tour for this incredible opportunity and recognition. Always wanted to experience the tour and all that comes along with it. I hope to do well and show decent level against my contenders.

Congrats Lexi Dupont for the girl's skiers wildcard! See you all there soon."

The Year of the Comeback: FWT 2022 Athlete Roster Confirmed! Outstanding...